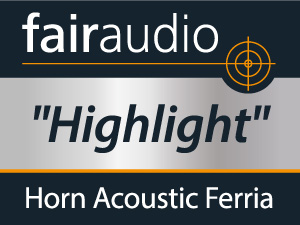 Horn Acoustic Ferria also won the AWARD 2023. This award is given to the best devices among all tested products in 2022 by Fairaudio magazine.

“One thing is certain: Pure emotion and liveliness are certainly the central talents of this exceptional speaker. The directness and immediacy with which both the low-mid driver and the horn act are something very special.

But the Ferria is more than just a fun machine, even if you can easily pump up a small party with it. It also convinces with fine detail and resolution, with clarity and transparency, not only with sheer acceleration and “load change joy”. If you listen with the Horn Acoustic, you are really close to the action – if not right in the middle.”

“Pepper’s album also showed me something that I expect from horn loudspeakers, ones of high sensitivity, but which is not imposed by Vivo, but appears only when it should: dynamics. These designs hide that feature a bit, but when needed they do hit listener quickly, accurately, with a dry slam, immediately encapsulated by “body” of sustain and decay.

That’s what happened on Pepper’s album, and that’s what I also heard on Diana Krall’s The Girl in the Other Room. Krall’s album is definitely not as good in terms of sound quality as the Intencity, but it is still a good recording. Vivo presented the internal tension between the instruments, built a large, dense and deep soundstage and fantastically conveyed the Antony Wilson’s guitar. The vocal was presented in the front, quite close to me, just like Sinatra’s before.

Only once I heard something like that at home also with horn loudspeakers, large, floor-standing JBLs, namely they took out the room from the equation offering a sound as if I was sitting with big headphones on. It was the same sensation of tangible sound pressure, as opposed to “interior sound”, as is usually the case. Interestingly, these loudspeakers do not require listener sitting still in optimal position – they kept a stable soundstage even when I was moving my head left and right. The center of the stage moved when I was doing it and the edges remained stable – really cool!”

“Miroslav Tadic’s “Duerme Negrito” from the album Spavati, Možda Sanjati at once reveals any speakers’ ability to reveal a distinctive drama was impressive. The sense of scale and weight at the very intro of the alone pushes any speakers to serious stress. On this album, Tadic shows his mastery to embrace different genres and styles regardless of origin by playing la puerta del bajo, fretless baritone guitar, electric and acoustic,  classical baritone guitar, etc.

Horn Acoustic Vivo speakers re-assembled Tadic’s virtuoso rendition of “Duerme Negrito” (Latin American lullaby) convincingly and with the refreshing aptness. Spavati, Možda Sanjati demands speed, tonal richness, and dynamic swiftness and Vivos have plenty to deliver.
The implementation of W10.8 has proven to be more than just justified. Seamless integration with the tweeter has produced a highly involving and music-rich impact that was lingering after each listening session.”
Read the original text

This site uses cookies – small text files that are placed on your machine to help the site provide a better user experience. In general, cookies are used to retain user preferences, store information for things like shopping carts, and provide anonymised tracking data to third party applications like Google Analytics. As a rule, cookies will make your browsing experience better. However, you may prefer to disable cookies on this site and on others. The most effective way to do this is to disable cookies in your browser. We suggest consulting the Help section of your browser or taking a look at the About Cookies website which offers guidance for all modern browsers
Go to Top